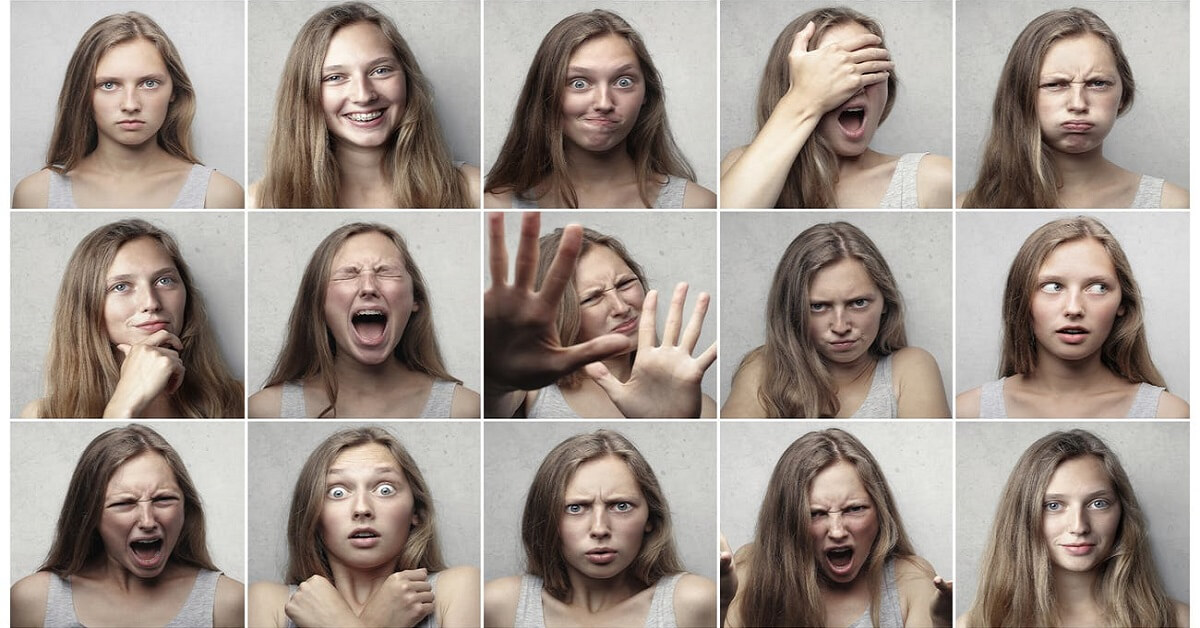 There are many situations where we don’t really mean what we say. The reason is that we just try to be polite and do not want to hurt the other person’s feelings by expressing our dislike for something that may hold significant value to them. However, our facial expressions often expose us by revealing the truth, hence putting us in an awkward situation.

Whereas most facial expressions are involuntary and a natural depiction of our true feelings, some may be purposely projected.

Today we will discuss the various types of facial expressions that serve to be an effective means of non-verbal communication. There are seven of them that are universally recognized.

The state of surprise is usually caused by a sudden, unexpected event. That event may be traumatic or extremely pleasant, thus causing the reaction to be categorized as a shock or a surprise. Usually, the facial expression denoting surprise may leave you with a mouth wide open, raised eyebrows and enlarged eyes.

The picture below will help you understand this type of facial expression better.

The expression of fear is usually confused with that of surprise. This is because a depiction of this emotion also involves the use of eyebrows, mouth and eyes.

However, when we are afraid of something, the eyebrows remain straight rather than in an arched style that is peculiar to the emotion of surprise. The eyes are wide open but expose more of the sclera than they do in a state of surprise, whereas the lips are stretched sideways but are far more tensed.

Have you ever noticed that when you are extremely happy, your cheeks automatically lift upwards, lip corners broaden diagonally to form a smile and muscles surrounding the eye area usually tighten?

Your facial expression during that time is similar to one reflected in the picture below:

Whereas extreme sadness may often cause a person to start crying, the facial expressions preceding it are usually marked by eyebrows raised from the inner corners and lower lip dropped down in disappointment. Even eyelids are usually left loose in such a state of grief.

Fun Fact:
Whereas other facial expressions can still be practiced and hence developed voluntarily, research has proved that it is particularly difficult to imitate the expression of sadness. Particularly, raising of the inner brow was an action that researchers found almost impossible to be imitated voluntarily without actually feeling sad.

This is the one type of facial expression that has often landed most of us in hot waters. Imagine you do not like the taste of food that has been offered to you by someone, or you do not approve of their dressing choice. However, upon being asked by the relevant person how it was, one is forced to appreciate it by enforcing a smile, so as not to appear rude.

Sometimes, the involuntary facial expression of disgust reveals our true feelings to the other person. Disgust is the emotion resulting from a feeling of dislike towards something. It is marked by a wrinkled nose and loose lips.

The below picture will help you better understand the facial expression that defines disgust.

Our involuntary facial expressions are designed by nature not just to reflect how we feel, but also to serve as defense mechanisms. For example, the expression of disgust which causes our nose to wrinkle partially blocks our nasal passage, thus preventing us to smell any unpleasant odor.

Though we are often told to avoid anger as extremity in this state may cause harm not only to others, but also to ourselves, but it is a universal truth that we all face this emotion when things do not go as planned.

The facial expressions that are usually a sign of anger represent both eyebrows simultaneously lowered, glaring eyes and narrowed corners of the lips.

Sometimes, to prevent the situation from escalating, we try to suppress our anger voluntarily. This results in the facial expressions particular to anger being apparent for only a fraction of a second. This is referred to as micro expression.

What are micro expressions?

Sometimes we try to hide our emotions consciously. However, the facial expressions that reflect those emotions are usually involuntary and may occur in a split of a second.

In such a situation, the neural pathways controlling both voluntary and involuntary expressions are activated and engage in a “war” with each other. This may cause the true emotions to be depicted on a person’s face for a limited time before being concealed. These short-term facial expressions are referred to as micro expressions.

Basically, the feeling of contempt arises when we consider someone or something to be worthless. The most interesting part about facial expressions representing contempt is that they are the only one amongst the seven universally recognized expressions that can be expressed via a single facial feature.

Contempt is represented by a slight elevation of one of the corners of the upper lip.

The most interesting fact about these seven types of facial expressions is that they are exactly the same amongst visually impaired and sighted individuals. This reflects that most facial expressions are genuine and therefore a knowledge about them will not only help you understand the true meanings behind a person’s sugar-coated words but also help you conceal your expressions when required.