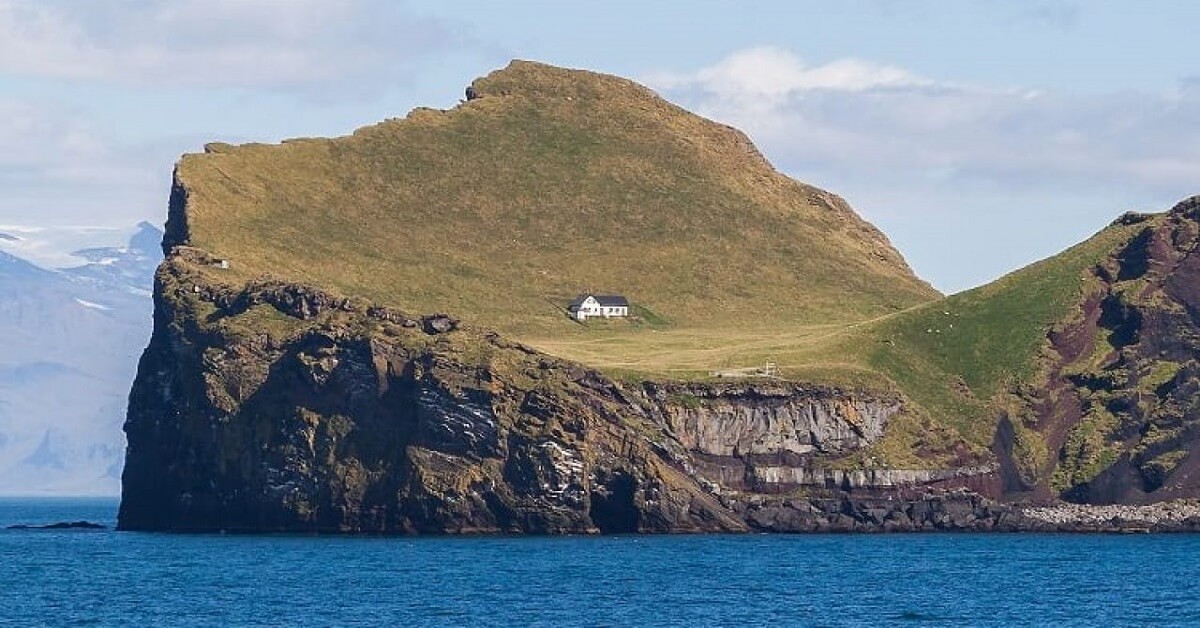 Where would you rather live? In a busy city center or a secluded town with a population so small, everyone knows each other well. Most would choose a busy, hustling bustling city center.

But not the people who choose to live in a lonesome house located on a remote island known as Ellidaey. Recently, pictures of the Ellery House have gone viral on social media as people fail to understand why someone would willingly want to live isolated from the rest of the world. With no Internet connectivity, electricity supply and complete social isolation, this cabin can either be a delightful experience for some, or something out of a horror movie for others.

Although it looks like it’s a scene from a movie, this house is very much real. It is not photoshopped either as some might assume.

The story behind this dream come true house (as some would call it), goes a long way back.

200 years ago, the island of Ellidaey was occupied by five families who survived by hunting and raising animals on the green land.

Of course, living far from civilization wasn’t easy, even back then. That’s why people started moving and leaving the island. It had become almost impossible to survive on the island, without any resources from the outer world.

People soon started to leave the island and soon by 1930s the island was abandoned. Now that’s an ideal set up for a horror movie, isn’t it? ut the beauty of the island and the prospect of complete social isolation and peace couldn’t keep people from being tempted to visit the island once again and so they did.

It was at this time in 1953 when this famous lodge known as Ellery House was built by the Ellidaey Hunting Association to allow people to hunt puffins. The house doesn’t have a power supply or indoor plumbing and only has a beautiful view and a sauna to make up for it.

The water for the sauna and other necessities such as cleaning, drinking, and cooking comes from a system of rainwater collection which is the only source for fresh water. The house provides a retreat to members of the Ellidaey Hunting Association and serves as a place for shelter and relaxation for them.

Over the years, the mysteriousness and curiosity surrounding the house has given rise to a lot of misconceptions about it, most of which aren’t true at all.

Ellery House is most certainly real and located on Ellidaey Island and not a hoax as people claim it to be. Most of the photos you will find on the internet of this famous lodge are taken from passing by airplanes and boats and are not Photoshopped or edited in any way.

The house isn’t technically a house, and is not inhabited by a hermit or an evil magician even though it may seem like the perfect place for them to stay.

Ellery’s house also isn’t home to any shy billionaire seeking refuge from society nor was it donated by the Icelandic government to Iceland’s famous pop star, Bjork. The misconception originated when the singer bought a house on a similar Icelandic island also named Ellidaey Island but we can be sure he doesn’t own the famous Ellery house.

We are sure all this talk about Ellery House and the Ellidaey Island has got you fascinated and almost convinced to visit it and experience what it is like to live in it. Unfortunately though, you can only visit Ellery house if you are a member of the Ellidaey Hunting Association yourself or know someone close who is a member.

A good news however, is that even though most of us aren’t skilled puffin hunters or don’t have relatives belonging to the Ellidaey Hunting Association, we can still catch a glimpse of this breathtaking view of the Ellery house driving by a boat which is no short of an unbelievable experience.

Perhaps a drive-by is what most people would prefer but would you live here on this beautiful island if you could? We will leave it up to you to decide.