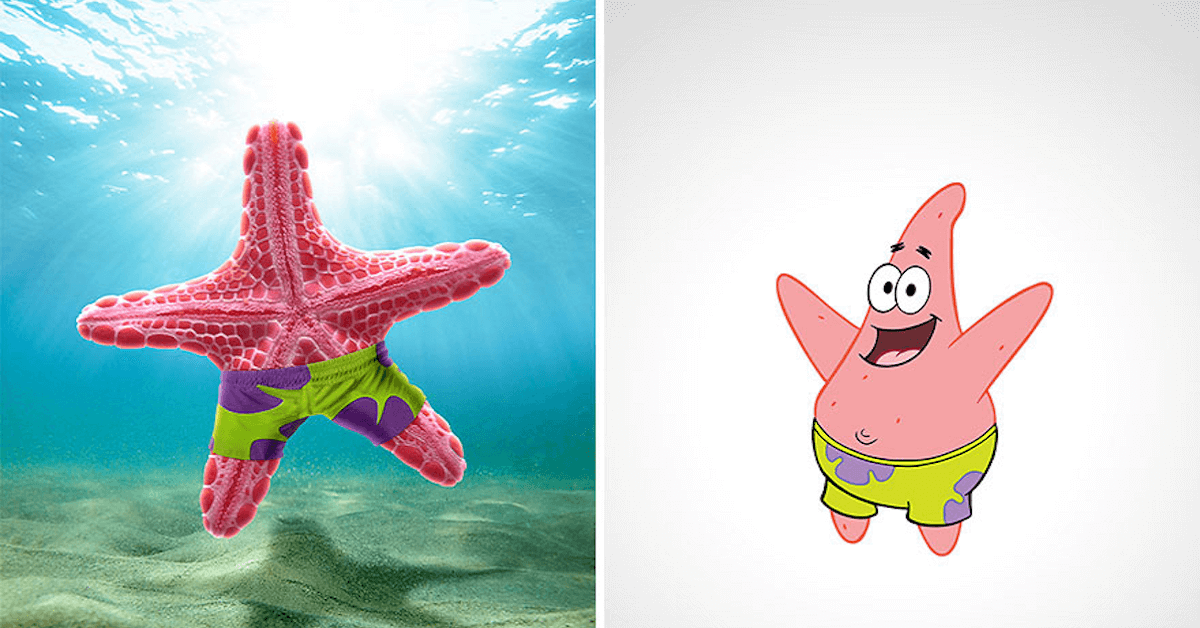 Whenever we hear something about cartoons, the caricatured images of some funny and goofy cartoon charactersimmediately pop into our minds, reminding us of our innocent childhood days.

But have you ever thought about how our favorite cartoon characters look in real life?

To find this out, several artists used 3D imaging and other digitized painting methods to recreate some of the most famous cartoon characters of all time, and to our astonishment, the images were kind of shocking and unexpected.

Kids love this adventurous pink-colored, funny looking pig whose one side is shown in the show always. However, a Twitter user decided to recreate the image to see how Peppa would look from the frontal view. Unfortunately, the resulting picture was not at all what the Twitter users or any other child might have expected.

That was not all. A Brazilian artist Yan Blanco used 3D tech to imagine what Peppa would have looked like in real life, and the image was more unflattering than the frontal view was!

The things we love about the cartoon characters from ‘The Simpsons’ is that all turned into extremely unappealing details when we saw the 3D image recreation of Homer Simpson and Marge Simpson by a professional character artist, Miguel Vasquez.

These images make them look menacing instead of endearing!

Mr. Burns, Ned Flanders, and Grampa would have been pretty scary to look at had they been alive in the real world!

The all-time favorite SpongeBob also turned out to be rather ‘unsettling to look at’ when Miguel Vasquez recreated its 3D image.

But then, this image turned downright ‘hideous’ when DeviantArt user Bawarner recreated our ever-lovable SpongeBob.

Who would have loved SpongeBob in real life if it had looked as weird as in this image!

Patrick, a friend of SpongeBob who looked quite sweet as a cartoon character also appears quite ‘devastating’ to our sensibilities with that absolutely weird smile and the bumpy, enlarged head!

An anti-hero cartoon characterfrom SpongeBob, a pretentious and ill-mannered ‘person.’ Surprisingly, when Miguel Vasquez recreated his image, it turned out to be pretty awesome! He would have looked quite nice if he had been a part of the real world.

However, another artist Habibity Nickerson came up with the recreation of Squidward, and even it is not that bad!

We can only thank our lucky stars that Beavis and Butthead are not real-life characters, otherwise who would have tolerated looking at such annoying guys!

Boris Kiselicki, a Berlin-based character artist recreated the image of the sweet and lovable extra-terrestrial Stitch. It appears as a menacing creature somewhere between Gollum from Lord of the Rings and a wild dog with rabies!

A lonely and sad guy with social anxiety issues. However, the cartoon version still has a sweetness that tugs at the viewer’s heartstrings. The real-life-like illustration by Tim O’Brien is just so distressing! If Charlie was a real-life character and had looked like this, he would have induced anxiety in a lot of people for sure!

Who would have thought that Pikachu would look so menacing and dangerous if it would have been a part of the real world?

The nerdy, sweet monster Mike from Monster Inc. would have looked quite creepy as demonstrated by Miguel Vasquez’s reimaging. Just look at those teeth and they would give you the shudders!

The sweet guy from Sesame Street would have looked quite…’ constipated!’ He seems as if he has some trouble swallowing also!

There would have been nothing normal if Finn and Jake had been alive in the real world! They would have looked super creepy!

3D artist Will Hughes showed how obnoxious both Stewie and Peter Griffin from Family Guy would have looked had they been not cartoon characters and some really living ‘species!’

Can you imagine a guy looking so astoundingly weird in real life? Wouldn’t it just be so creepy?

The sweet and funny dog that Courage was, had it been a real-life character, it would not have been as endearing as it was as a cartoon character.

If crazy and crazier had a competition, then Fry and Professor Hubert J. Fansworth from Futurama would have won if they were real-life characters!

Rick and Morty would have looked funny and quite close to how they look in their cartoon versions. Their eyes would have given the heebie-jeebies though!

The cartoon versions of these characters were also not normal, however, if they had been real, they would have given some highly disturbing visuals with their ‘high on drugs’ looks and ‘crazed out’ eyes!

Who would have thought to see some crazy Bananas in Pajamas smoking cigarettes and looking as if they are just getting ready for a major mafia meeting, or as they are the dangerous drug-lords themselves!

Timmy Turner, the awkward guy from Fairly Odd Parents would surprisingly look like a small girl if he had been living in the real world. However, the visuals would not have been so appealing, nonetheless.

Our Super Mario would have looked endearing in real life though. Might as well look quite handsome too, actually! Korean 3D artist Soojong Kim made him look like a sweet plumber here in the 3D image version with those super blue eyes and that funny, ball-sized nose.

43 thoughts on “How would Cartoon characters look in real life?”