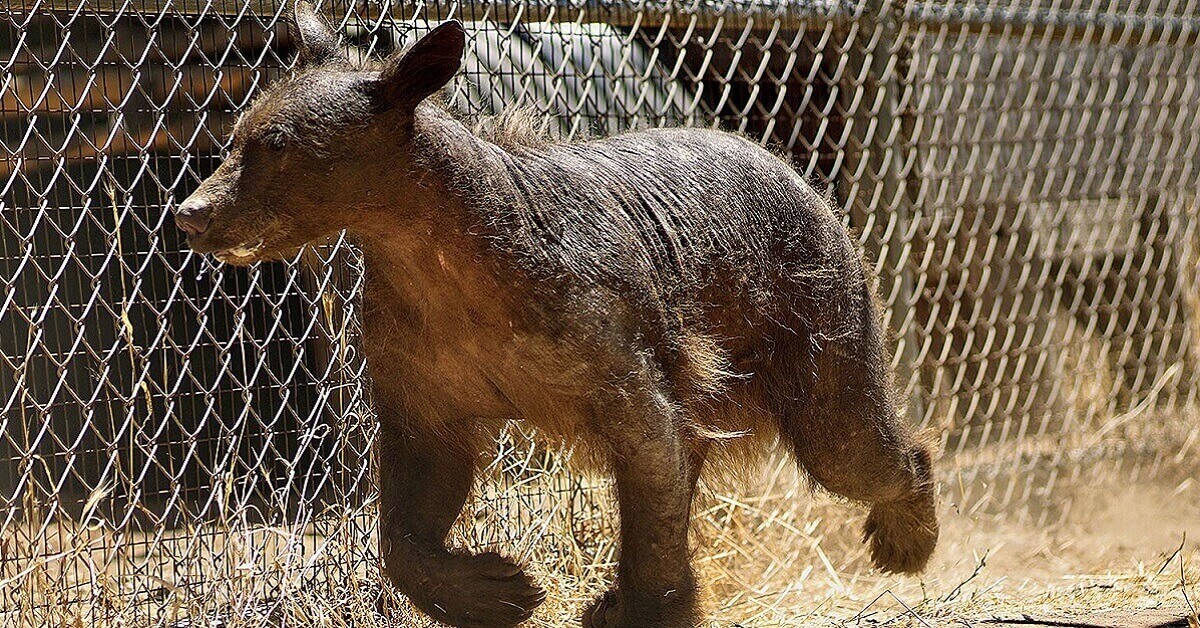 If you are an animal lover, you probably agree that looks do not determine how much love an animal gets. Let’s get that straight first, a hairless bear or any other animal without hair does not deserve any less love than one with fluffy hair. Too many times, poor animals have to rely heavily on how cute they look for their human friends to adopt or even treat them fairly. You have probably heard about the low rate of adoption black cats have.

Regardless, while accepting those appearances should not translate into how they are treated, we can now come to discussing how jarring animals without hair can be. Especially those that are rarely seen without them. Something is calming about the regular, about the random, everyday things we see. We’re used to them, we are comfortable with how we view those things. That is the reason why watching a regular hairy animal we don’t give much heed to, without hair, is so shocking and off-putting.

The only common hairless animal you might have witnessed is the Sphynx cat that is a wrinkly breed without a single hair on its body. Quick pop-culture reference, episode 2, The One with the Ball, Season 5 of Friends features a Sphynx cat. Apart from that, it is not very common to see a hairless/bald animal around, unless you regularly work with animals. Let’s take a look at some animals that become almost unrecognizable without hair:

The bone structure of penguins is not the only thing that will shock you about them. Turns out, hairless penguins? Not as cute while trotting. There’s nothing wrong with a naked skin penguin but nobody could think how much fur was covering that pinkish body. All birds have feathers but those that don’t show them off with flying seem weirder without them.

Now this one is a little contradicting, is it creepier or less creepy, you choose your play. The unfortunate thing is, some monkeys much like humans can suffer from alopecia, a skin disease that can make you lose all bodily hair. It is practically harmless in terms of quality of life unless the animal is from a colder area. The above one seems to show some hair which means it might still be able to grow some.

Do not imagine your Thanksgiving dinner, if you are a chicken alternative household, after looking at this picture. It would not be your fault however, the similarity is striking, probably because they are the same, just more alive. Regardless, no one wants to see their dinner roaming around in a hairless heap of meat and wrinkly skin. These roosters look to be hunting for their food, which is just the irony of this entire picture.

Ah, the hairless bear is here. Many people have previously argued about the adorable scale of bears. Being natural predators does not help their cause, and neither does this above picture. It just looks like a tired grandpa who needs to lie down.

This is the most hilarious picture on the list. Many animals are born without hair initially when they come out of their mama’s wombs, but gradually start developing hair. This rabbit however looks older than a newborn but might have some specific case of baldness. The hair on the paws, ears, and chin shows that it is not completely meant to be bald. It looks like it would make for a perfect old wise wizard master in a Disney movie.

Even ratatouille couldn’t salvage the cuteness of mice after this above picture that just says ‘rage’. It is so complex, one cannot even figure out if it is a hamster or a mouse. You can tell from the size, but can you for sure now.

If you watch avid videos of Raccoons causing a ruckus through public and private property, this hairless raccoon will have you rolling in laughter. After the hairless bear, this is second in the list of photos doing some serious damage to their street rep. Raccoons can be chaotic if you are not one to get scared easily. But if you are, they might terrorize you enough to cause the previously stated chaos. Either way, chaos is happening. Now if a bald raccoon turns up near you somewhere, you are sure to run the other way screaming. Turns out they also face a parasitic infestation that causes hair loss, most common among raccoons living in the wildlife.

If you are a fellow believer in ‘Aardvarks seem otherworldly’, welcome to the ‘wow I didn’t see this coming’ club. These cuties with their big snouts are much more lively with hair on for sure.

The last contender in the list of ‘how much weirder can this get?’ is our hairless Kangaroo baby. This might help the usual big builder Kangaroo image, which makes them look very much intimidating, and ready to end you in a kickboxing fight.

So what did we learn today? That a hairless bear can look less deadly but a hairless mouse might have you terrified just by looking at you. To repeat what was said at the start, looks are not meant to treat anyone unkindly. Just like humans, some are gifted with naturally attractive features, but everyone should be treated with the same love and kindness regardless of how cute they look.