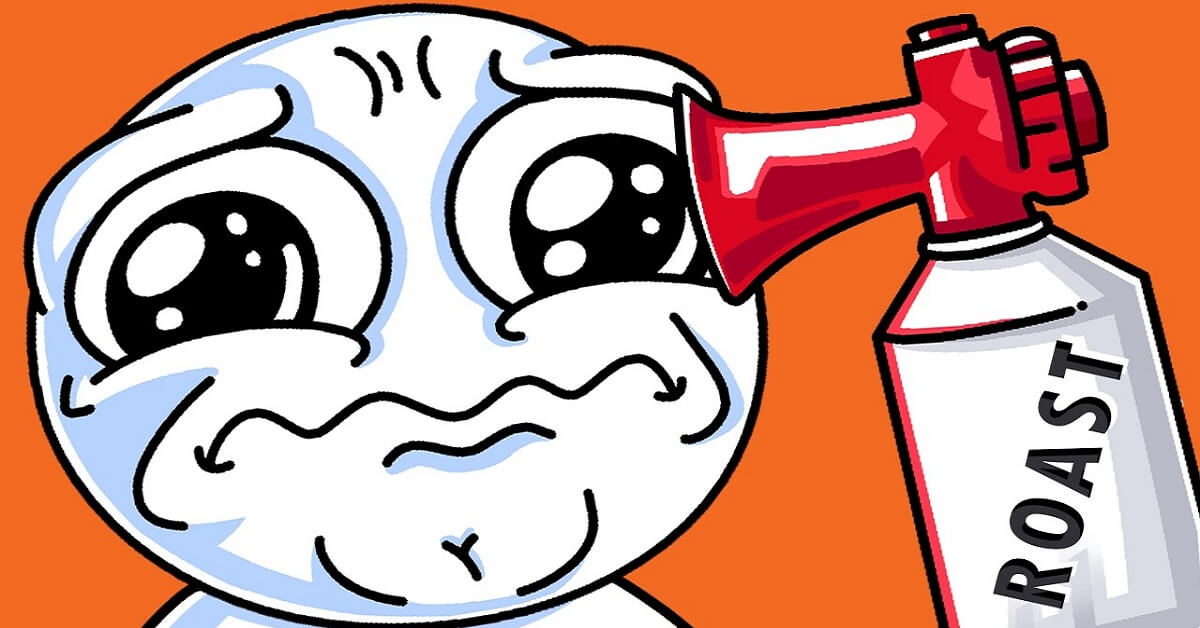 We all have come across many people who have a habit of crossing their boundaries and asking personal questions repeatedly. Others ignite our anger by stepping on our pet peeve, even after multiple warnings. Whereas such actions often result in anger and savage comebacks, pranks from friends also sometimes call for insulting remarks that we later laugh at.

Whatever be the reason for their utterance, here is a collection of the funniest roasts ever for you to read and enjoy.

Sometimes when we entrust our friends with a particular task, but they fail to complete it either out of forgetfulness or laziness, this comment can be used to communicate the disappointment. However, more often than not, we find this taunt being used by our parents for failure to perform the assigned household chores or as a response to our poor performance at school.

Though we all agree that body shaming is something that we all should abstain from, but sometimes during a verbal fight, we forget our boundaries and use this statement to shame an obese person.

The reason it is classified as a funny insult is that mostly the subject of such a roast is a close friend who is particularly fussy about his/her double chin.

We all know someone who speaks non-stop, no matter how many times we tell them to take a pause. A hilarious way to roast them while simultaneously getting your point across would be asking if they have an “off” button.

The “off” here is analogous to that of a switch, thus implying that we would turn them mute if we had the option.

One of the most commonly used yet funniest roasts ever, this comment usually brings a smile on the faces of both the subject and the ridiculer.

Oftentimes you really want to tell your friends to hold their tongue during an argument but they don’t listen. For others, you want to communicate how mad you are at someone without being physically violent.

The above response would be ideal for both types of situations. It may also cause someone overhearing your conversation to burst into laughter at such a fierce comment.

We have all been in situations where a relative or a friend who meets us after a long time, keeps pestering us by saying we have changed or that we are not the same person anymore.

It’s an obvious fact that people groom and evolve over time in terms of personality and also appear physically different from what they used to in childhood.

A smart comeback for such people would be telling them that there is a difference between changing and ageing. The comment depicted in the image above would do the job for you without sounding too harsh.

Let’s admit, this one hit all of us really hard.

Though break-ups are a part of life, it is ironic how most people have stopped taking relationships seriously these days without accounting for the other person’s feelings.

Sometimes, such acquaintances need to be given a reality check, but in a subtle manner. Comparing their relationships with a smartphone battery would be one of the funniest roasts ever that is likely to leave them speechless.

Listed amongst the funniest roasts ever, this taunt starts with a harmless question asking the subject if they had a thought in mind. The very next second s/he is unexpectedly attacked with a verbal strike. Telling them that the thought must be lonely, thus implying that they are usually mindless or not capable of making wise decisions.

A hilarious way to roast your friends by depicting they never come up with smart ideas, this comment is likely to have both the subject and the scoffer in fits of laughter.

This is not only one of the funniest roasts ever but also similar to comments we have all passed at our siblings during a fight.

Irrespective of the fact that we love them and can`t live without them, we are all guilty of telling them that they were disliked by everyone when they were born. This hilarious comeback that can be used during the next tussle, says that the subject was thrown out of the window by the doctor at their birth but they were so unwanted that even the window threw them back.

There are countless other examples of such savage comebacks that are hilarious, yet rude at the same time. Though one should remain polite and humble, there are times when a stern response is essential. Before you find yourself in such a situation, you must learn the funniest roasts ever that have been mentioned in this article and be prepared to respond according to the situations that require to be dealt with fiercely.