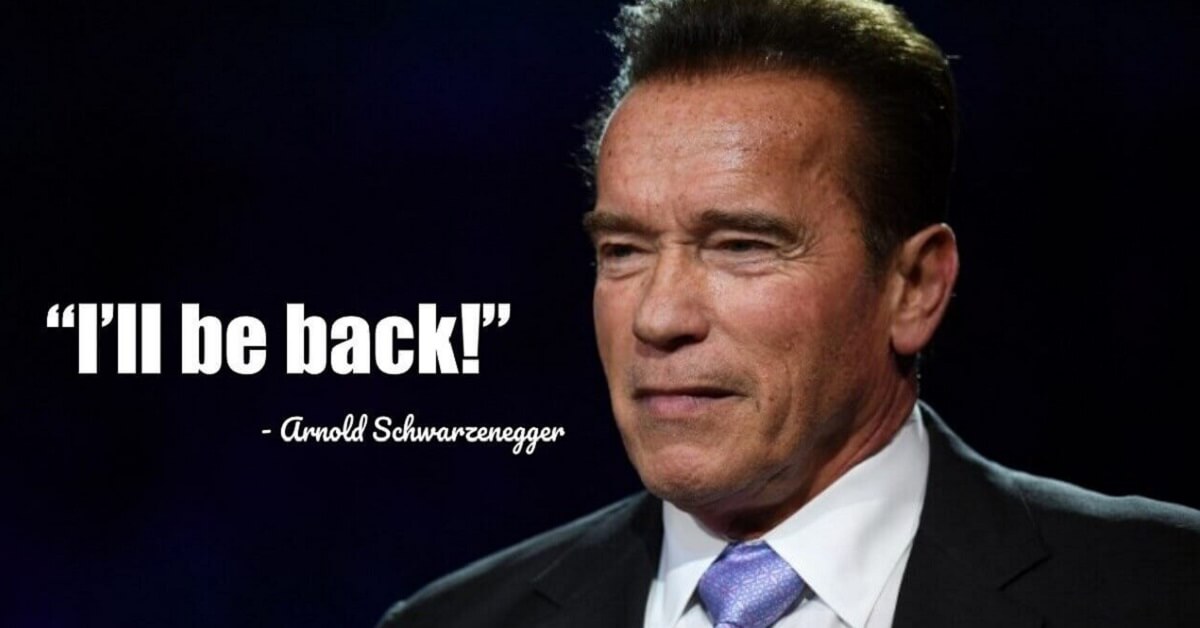 If you have grown up watching the Terminator or Predator series, this is going to be a little funny and a lot weird. Some of the funniest Arnold Schwarzenegger quotes are not movie lines he might have delivered but also real-life things he has said, publicly. The list of things on Schwarzenegger’s resume is not just diverse, they are a lot.

He started his career as an actor and came to be known as the relentless fighter in many action-packed movies. But his interests quickly took him to bodybuilding, producing movies, and then eventually owning his own business. Regardless of all these previous adventures, his move into politics was shocking to many who did not see the man in any political light. He not only ran but won and served as the 38th governor of California from 2003 to 2011 from the Republican Party.

There are moments in one’s past life when one says and even believes in things that they might not anymore. But in Schwarzenegger’s case, we cannot even give him the benefit of the doubt for being young and immature because his funniest and strangest moments are very recent. Let’s look at some of his quotes and see where they lie on the funny scale, 1 being the lowest and 5 being the highest:

“I can promise you that when I go to Sacramento, I will pump up Sacramento.”

Being a political figure can be taxing and we all know that because there are so many eyes on you, waiting for you to make that one wrong move. Anything can destroy your public image these days if you do not know how to carry yourself publicly. But there are some cases of public figures which make us wonder how their brain functions.

The above quote might seem harmless, but it is very harmful to comedy. The unintentional humor that is found in this statement just makes it funnier than it is supposed to be. This is a classic 3 on the scale of funny, no there cannot be any discussions.

“My relationship to power and authority is that I’m all for it. People need somebody to watch over them. Ninety-five percent of the people in the world need to be told what to do and how to behave.”

Some people’s humor comes from self-deprecating jokes, not Arnold Schwarzenegger though. The above statement is perfect meme material, it can fit into so many places, and it will make you laugh every time. If we ever could’ve known the terminator would become himself in real life, what an experience it would have been while first watching the movies. A 4 on the scale, easily.

“I don’t understand how they can call me anti-Latino when I’ve made four movies in Mexico.”

If you have never laughed at jokes at the expense of white people before, you will not understand the above one either. A good 4.5 on the scale of funny and -1 on being informed and talking responsibly. We have all dealt with at least one person who says something like, “How can I be racist? All of my maids are Black and I love sushi.” If you are saying you have not met someone who thinks like this, you are lying. Mexico is not just Hollywood’s favorite country to shoot highly saturated movies in but also somehow a way to prove your anti-racist stance.

From the time they get up in the morning and flush the toilet, they’re taxed. Then they go and get the cup of coffee, they’re taxed…This goes on all day long. Tax, tax, tax.”

Another banger we have here. A good 2.5-3 on the funny scale. Also, a good expression to show your disdain regarding getting taxed for your benefit. As first-world citizens, we Americans have it much easier than the rest of the world and it is because of the public infrastructure made possible by the governing bodies. This might not be a political piece but Schwarzenegger himself is, so what can we do about it?

As you know, I don’t need to take any money from anybody. I have plenty of money myself. I will make the decisions for the people.”

Many politicians are dependent on common folks or other larger organizations for donations, for their campaigns, and whatnot. This is another way they gather public interest and support and convince people to invest money and efforts in you and your political figure. However, as a rich person, Schwarzenegger didn’t need money; all he needed was the position to make our decisions. Isn’t that every politician’s dream? A very close tie-in with our quote number two. These were all the funniest Arnold Schwarzenegger quotes we thought were good humor analysis material. Who knows what kind of Schwarzenegger humor the future brings us.