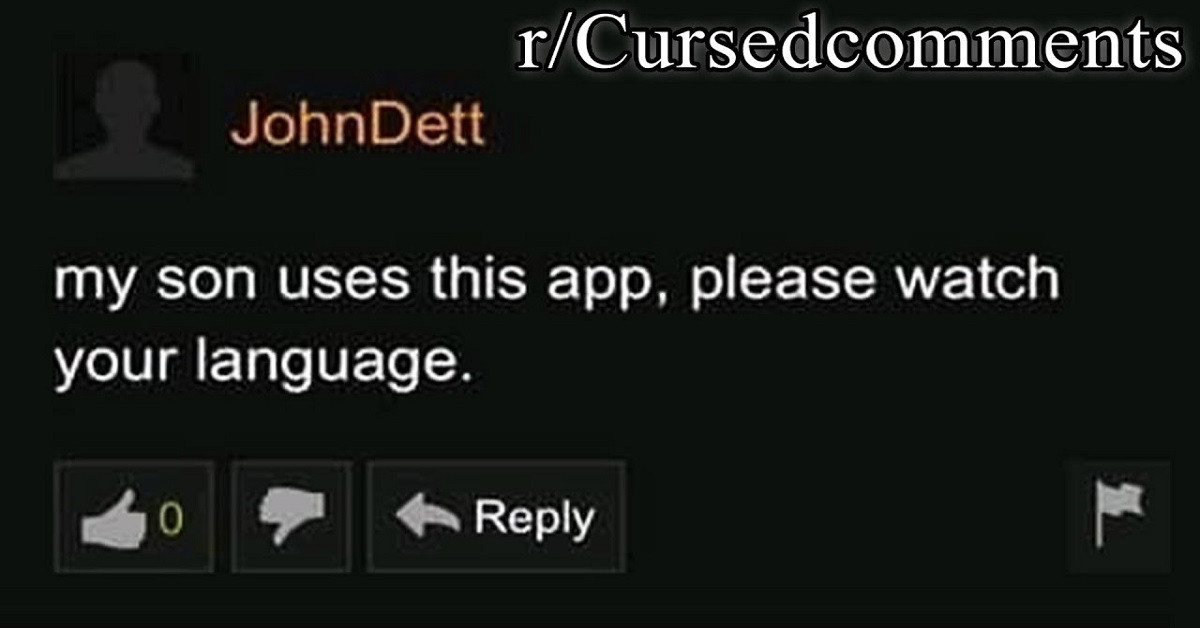 When was the last time you read something awful? Not metaphorically but literally. If not then you must check out the “Cursed Comments” subreddit. The platform is home to cursed comments that people encounter. You need to have an understanding of dark humor to gulp down such comments. There is a reason why the platform was named as “cursed comments”. It steals your peace of mind and leaves you restless. The comments strike you like a bullet in the head with the force of a rhino running a monster truck into your head.

The cursed comments subreddit is a big community with 2.2 million individuals following it. It was started on April 18, since then it is home to cursed individuals and keeping them from going insane. Though, the platform is not just about hate or cringiness – the moderators want you to have fun, too.

Now grab a chair and have a glass of cold water with you because we are going to reveal some vicious cursed comments that will make you question yourself why did you even read it? Also, don’t forget to check in the end which one out of them hit you the most.

There was a tweet posted from a profile named Rudy Betrayed, saying what if your first name was Holden and your last name was Berries, how would you introduce yourself to others?  “Hello, I’m Holden Berries”. But it turned out that somebody had this name in real life and he felt attacked.

Well, no offense, but the name does sound hilarious.

A person posted a picture of a scratched wrist and a cat in the background with a caption saying “what did you learn?”. “A cat can make your death seem like a suicide” replied some random person to him.

From his reply, he does not seem like a cat person.

A profile on Twitter shared the news that an American girl released the first doll ever with hearing loss to which somebody replied in wonder “wait, were the other ones able to hear us?”

Well, interesting question. We would also want to know the answer to it.

A girl posted this tweet expressing how much a good night’s kiss is soothing and how the purest form of love it is. To which she got a reply “until you are home alone”.

After reading this, most people are now scared of getting a goodnight kiss.

There was a post asking people to spare a few seconds to thank God for saving you from Covid-19 as it has already killed 1.6 million people. To this, somebody replied “thank you God for killing 1.6 million people”

Well, it might be wrong to laugh at such comments but you should not forget about the importance of humor in life especially in times like Covid-19.  It can make someone’s day better.

It seems like only she was fortunate enough to make it through this deadly project.

A girl posted a picture of her hairy cat who was more or less looking like a sheep. Somebody asked if it is a cat or a shat? Or maybe a shitten?

Tip:  Don’t read such memes at work, you will be unable to control your laughter.

A random page posted a toll to choose between who should the self-driving car kill first? The baby? Or the old lady? Somebody replied that you can take out both of them at once if you know how to drift.

The person seems quite experienced in killing people.

There was a picture on social media showing doctors’ efforts to save the patient from dying but somebody thought it could also be perceived as the patient wanting to leave without paying.

That’s interesting, who’s paying those hefty healthcare bills in the US if a patient died and was not insured?

There was a meme on Santa that said, what if he visits every household during the time of Covid-19 and kills every single person on earth?

Fortunately, Santa does not visit every household. Phew!

Somebody posted on social media that your heartbeat is perfectly synchronized with someone else’s heartbeat. A person replied yes especially if you are dead.

It can’t be more accurate though.

Making people smile is a kind act and especially if you’re abiding by the rules because then there’s no harm in it. These are a few cursed comments that we have picked out of a big pool of hilarious comments to bring a smile to your face. Don’t forget to swift out good things out of bad things in every matter of life. Spread positivity because the world needs it the most at the moment.