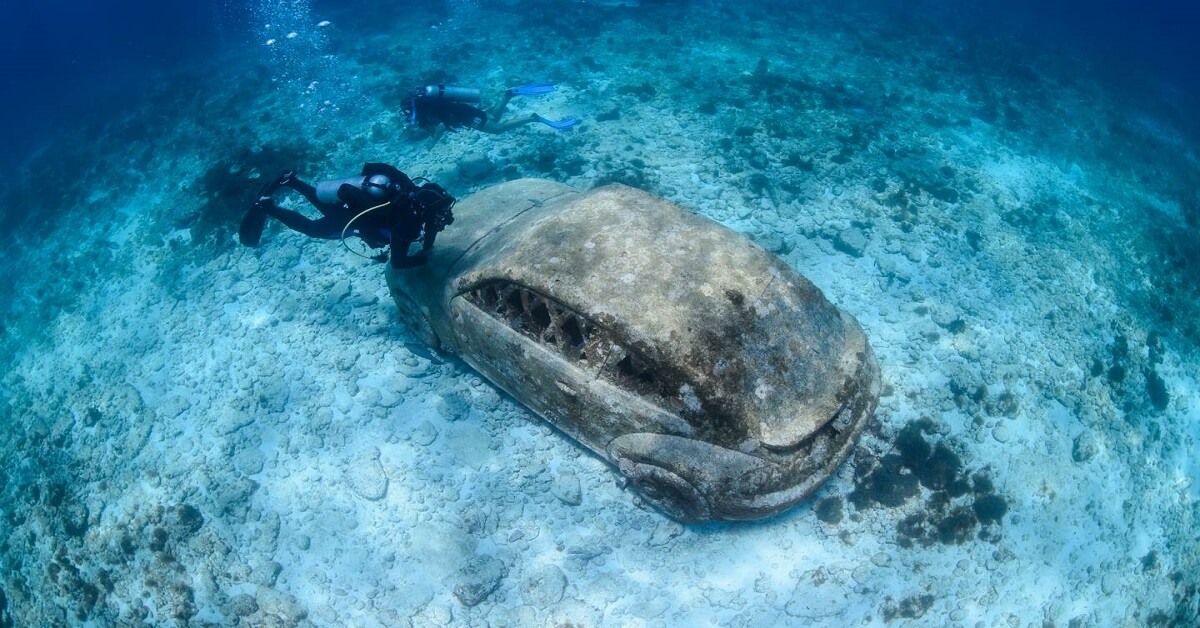 There are several lakes across the world that are famous for their mysteries and secrets. The past decades witnessed hundreds of technological breakthroughs, but still, the vastness and extreme depth of water often results in scary exploration. Some lakes have very creepy things that make them as mysterious as the oceans.

Mostly, when the depth of lakes is explored, they are just filled with useless junk. But in some instances, some people have managed to accidentally discover truly intriguing and creepy things.

Here we have shortlisted 10 horrifying and creepy stuff discovered in different lakes. Let’s have a look!

In Oklahoma, two vintage rusting cars were found at the Foss Lake’s bottom in September 2013, along with 6 dead people inside. There were 3 teenagers, naming Leah Gail Johnson (18 years old), Thomas Michael Rios (18 years old), and Jimmy Allen Williams (16 years old) in one car. The records show that these teenagers went out on a drive one day in 1970 and had been missing since. The rest of the dead bodies were of three passengers who had been missing since 1969. Their names were Cleburn Hammack (42 years old), Nora Marie Duncan (58 years old), and John Alva Porter (69 years old). The death of all those people were claimed to be accidental and through drowning by medical examiners.

A Jesus Statue at the lake Michigan bed

The bottom of Michigan Lake consists of a life-sized statue of crucified Jesus along with an 11-foot tall cross made of white marble. After discovering the statue, the locals researched and found out that this statue was originally made in 1956 in Italy. A family who tragically lost their teenage son requested its craft.

Unfortunately, the crucifix got damaged while coming to the US from Italy, and the family didn’t accept it. It was then bought by a diving crew and they lowered it into Michigan Lake for future divers to discover.

A creepy leg was found protruding from a beaver impoundment by 2 people from Germantown while they were canoeing in 2006. They first got scared and thought it was some dead body dumped in the lake, but soon discovered that it was just a fake limb. On investigating, they discovered that this creepy leg belonged to Mark Warner (49 years old) who lost it while fishing.

200 Skeletons in a Himalayan Lake

Near the Himalayan Mountains, an isolated lake naming Roopkund is located. In 1942, a British guard found the creepiest thing of all, i.e. bones of 200 humans. First, it was perceived that the skeleton belonged to those Japanese militaries who died in WWII. But it was later discovered by scientists that those skeletons date back to the Indian clan who died during a rainstorm in 850 AD. If that isn’t creepy, we don’t know what is.

The Stonehenge discovered under lake Michigan

An underwater archeology professor at Northwestern Michigan College, Mark Holley, found out an arrangement of stones in a perfect circle shape underneath Lake Michigan in 2007. The stone’s alignment was a mile long and was dated back more than 10,000 years. Moreover, a mastodon is carved on one of the stones. Mastodon is a kind of elephant that became extinct 10,000 years back.

A man was snorkeling in the river of Colorado and found a very terrifying and creepy thing. Under 40 feet of the Colorado River, he discovered two skeletons in lawn chairs and wearing sunglasses. The man immediately reported to the Sheriff’s Office but it was discovered that those skeletons were made of plastic. This creepy incident turned out to be a funny one in the end.

In June 2011, an oddly shaped and mysterious anomaly was found on the river bed of the Baltic lake. That strange and creepy thing was discovered through sonar technology lying 300 feet down the lake and is 210 feet long. The discovery team also noticed resembling stairways, ramps, and other unnatural structures. Nobody till now knows who was its creator and why was it created in the first place.

The sonar technology discovered a mysterious plane lying underneath Lake Norman in 2013. What is interesting is that no plane of similar description crashed before and there were no bodies present on the mysterious plane as well.

The plan continued to be an unresolved mystery until Barbara Anderson came forward and claimed that it was her private plane that might have landed in the lake because the brake was not put up.

The Norwegian Hydro ferry was sunk by the allied forces in 1944, along with the heavy water cargo meant for the secret atom bomb scheme of Nazis. Heavy water comprises unique atomic properties and structures for building nuclear weapons and bombs. This was a one of its kind creepy discovery that saved the nation from Nazi brutality.

In 2013, a geographical survey was being conducted by Tel Aviv University regarding the southern Galilee Lake, situated in Northern Israel. The researchers stumbled upon a very interesting and creepy thing on the lake bed i.e. a cone-shaped tombstone. That monument was 230 feet wide, 39 feet long, and weighed approximately 60,000 tons.

Further research revealed that the mysterious monument was built in the Bronze Age 6,000 years before on the dry land and it belonged to the early European burial sites.

20 thoughts on “10 Creepy things lying deep in the waters”