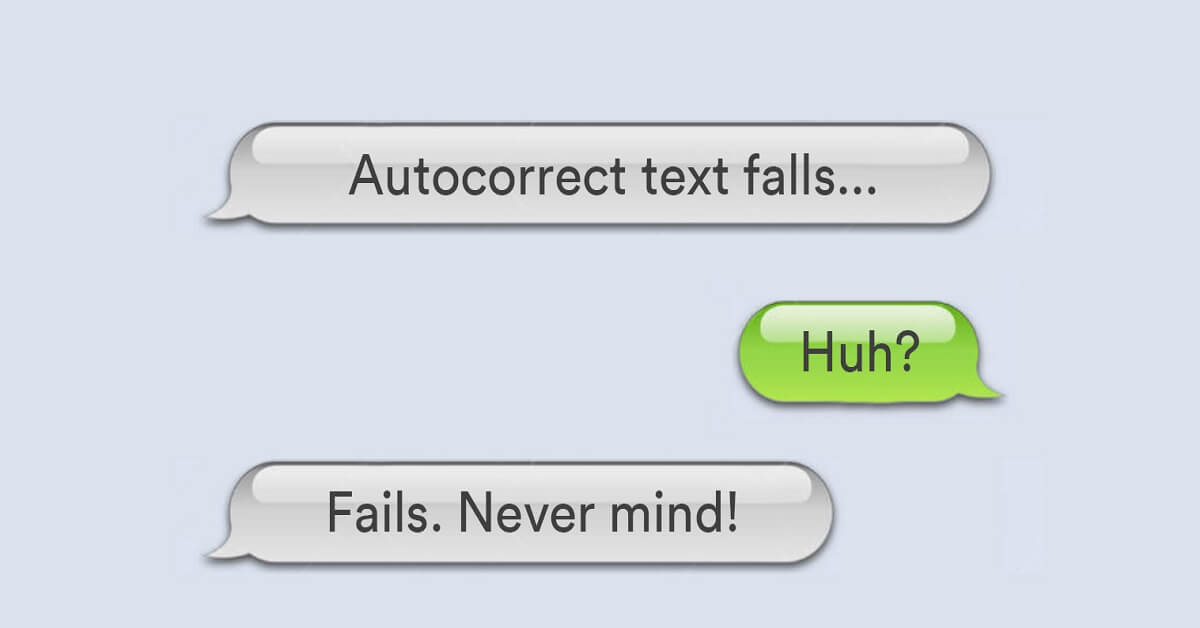 We might be the best of friends with our parents, yet there will always exist a fine line between their generation and ours. One of the factors besides age and experience which plays a major role in this bifurcation is the technological advancement that has taken place in the past two decades. As a result, many, if not all, Generation X members struggle with modern gadgets like laptops and smartphones. Talking about the latter, autocorrect fails and awkward parent texts are not new to teenagers and young adults who have forced their parents to switch to smartphones from conventional mobile phones.

Such instances are cute, but funny and sometimes result in messages that leave us laughing till our stomach hurts. Let’s admit that many parents are still unaware of the abbreviations that are common in chat lingo, text slang, or SMS language-whatever you may call it. Others get confused at the sight of autocorrect altering the text they type. Some, on the other hand, fail to notice these changes in the first place.

We have gathered screenshots of some hilarious text messages from parents which were shared online by their children. We hope you find the content entertaining.

Most of us do not expect abusive language from our parents. It would therefore be extremely astonishing if they were to respond with “WTF” to our message, especially to one informing them about our outstanding performance in an exam.

Imagine discovering that all this time your mom thought “WTF” stood for “Well that’s fantastic”….

What would have been your reaction if you were in OP’s place?

This is exactly what we meant when we mentioned parents’ struggling with technology. The dad in this case seems to be unaware of the existence of the group chat feature. The poor man is asking his child about his wife’s Christmas gift in a family group where the lady is also present.

Upon being explained how it works, all the dad could say was “…get me out of here”.

Doesn’t the request sound like a flashback of the childhood days when we would yell the very same words at our dads upon failing to find our way out of the play tunnels?

Although this one has frequently been shared on the internet, it is such an epic example of an awkward parent text that it causes everyone to burst into laughter, no matter how many times they have seen the screenshot.

Imagine your mom mentioning that she has sent numerous people a text message including the word “LOL” when announcing the death of a close relative. Your heart would skip a beat at the thought that extended family would be wondering why your mom is so happy at the demise of your aunt, whereas oblivious to her blunder, your mother continues believing she sent “lots of love” to console family members at such a difficult time.

Maybe we should make our parents learn all the text abbreviations by heart, exactly the way they used to make us memorize academic content before our exams.

How would you feel if you explained to your mom every abbreviation used in chat lingo, but she fails to comprehend the message, stating that she will learn the same from your sibling?

Before you lose your temper, we would recommend trying to review the situation from a neutral point of view and explaining to her that the text you wrote was not a personal communication, but a response to her query.

If you think you are the only ones who can trick parents via the use of technology, you are probably mistaken.

This is how a smart mom/dad monitors whether their kids use mobile phones in school or concentrate on their lectures.

If you are wondering whether the recipient of this message would have laughed till her eyes watered or cried out of infatuation upon receiving such a strange and unnecessary text from her mother, you are not alone. We are in the same dilemma.

We have all been grounded in childhood for reasons such as failing an exam, lying, or misbehaving. However, some parents never seem to get over the habit of punishing their children.

Someone sent a hilariously threatening message to their kid demanding that the child reveal the present s/he was planning to give to the parent, or else they would be grounded.

Built-in features in most smartphones suggest automatic replies to an incoming call or message. It is upon the individual to select or discard them. However, some parents unknowingly select the option multiple times.

The above example represents how a dad sent repeated messages to his offspring stating he was in a meeting. Perplexed at being continuously informed of his dad’s whereabouts, when the child texted to confirm whether the father was actually in a meeting, the father’s priceless response was “No, why?”

There is a category of parents that love to jump to conclusions. Michael’s mom seems to fall in that group. The poor guy mistakenly sent an incomplete text to his mother saying that he decided to come out. The mom assumed he was gay and opening up to her about it so she assured him that she would love him the same, no matter what his sexual orientation.

We would have appreciated the mom’s understanding of nature if that would have been the case but what the boy meant to say was that he was coming out to visit his parents-the mother didn’t even wait a minute for the second part of the message before typing a response based on her assumption.

Who wouldn’t want to become the owner of Google?

However, the only possibility of that happening is in your parent’s imagination.

If your mom believes that you are the one who makes decisions regarding Google logos and runs the software, you would need more than a simple “No” to explain to her how things work in the tech world, but before doing that, do make sure you fantasize that possibility, although for a brief moment.

There is no shortage of screenshots representing autocorrect fails and awkward parent texts circulating on the internet, but if you have encountered such an incident in real life, we would love to hear your story.

1 thought on “Generation X and its struggle with technology: Hilarious examples”