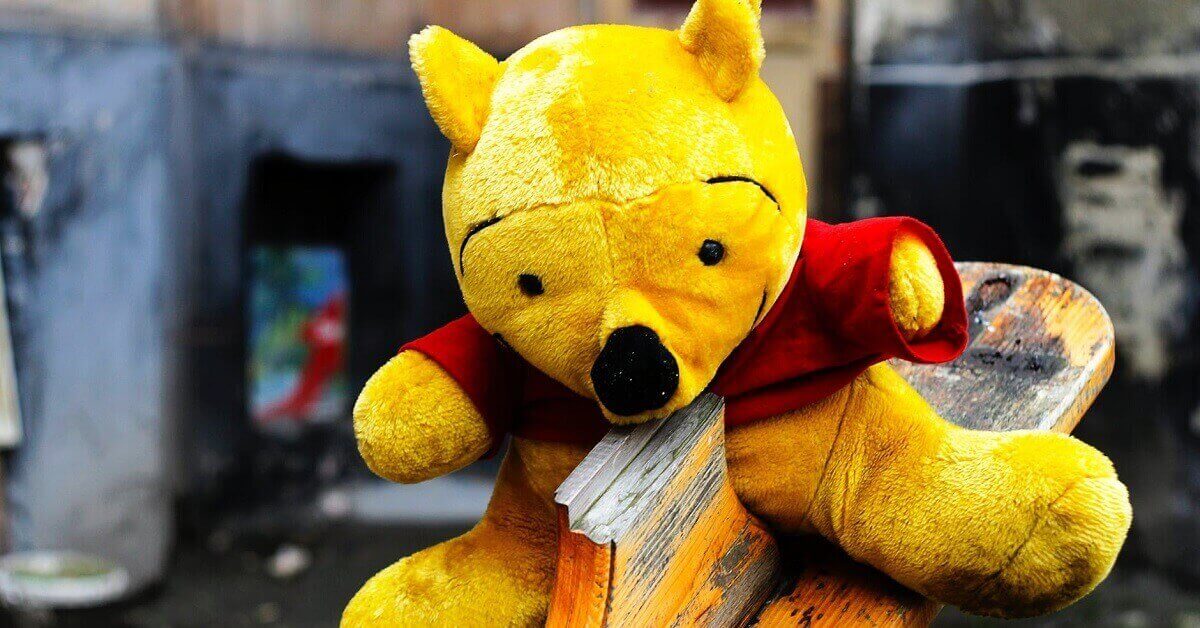 “Well, he’s short and fat, but he is proud of that.” Also, isn’t he adorable to look at?

How Winnie the Pooh was found?

We all know that Winnie the Pooh is a fictional teddy bear (male) cartoon character. It was created by English author A. A. Milne and English illustrator E. H. Shepard.

Whether you admit it or not, we all have been fans of Pooh since childhood. Kids still love to watch Winnie the Pooh cartoons. You can’t deny that it’s an innocent and charming character.

What about Winnie the Pooh jokes?

Winnie the Pooh jokes have been quite famous amongst the children and teenagers for a long time. After all, they are worth giggling upon.

Get ready to embrace a laughter session, as we bring you some of the most hilarious jokes on Winnie the Pooh.

Warning – Be prepared for a jaw-dropping giggling experience.

Without further ado, let’s check out Winnie the Pooh jokes.

Where are his pants?

Peekaboo! Ever wondered why he wears a shirt only? What about the pants? Lately, this has been the biggest joke on him. If he feels like hiding his upper body, then why not the lower one?

Let’s just consider that the creator of the character was not much interested in covering Winnie’s whole body. On the other hand, most people say, it’s just the way the character was thought about. But we all think that he needs to have pants.

How does Pooh hold all that honey with his paws alone? You got no fingers or hands, teddy!

Can anyone on this planet tell us: how does Winnie the Pooh manage to hold all the honey in his hands? We wonder how he could even do that, as honey is a viscous and sticky liquid. But still Winnie manages to hold it all together. Indeed, the author and the illustrator were clever enough to fool all the children.

Nonetheless, Winnie looks adorable while having his ‘Hunny’ that is actually honey.

How can he hold a knife and spoon with paws?

As you can see in the image, he is holding a knife and a spoon in his paws. Wow! Winnie, you seem to be a good cook. Impressive!

It’s important to notice how Winnie the Pooh manages to hold a fork and spoon in his hands? RIP logic.

Well, it looks like the Chinese government is scared of Winnie the Pooh, as they have banned different cartoons because bloggers are making some funny compilations of Winnie, the Pooh, and the Chinese President.

Now, this is something worth laughing at.

As you can see yourself, both the pictures are somewhat similar and the comparisons are damn hilarious. There were many memes shared online. But the Chinese government took the matter way too seriously.

Okay, this is the last one for this particular joke. We leave you with this image. It’s time to laugh out loud.

Where are the shoes?

It seems like Winnie the Pooh doesn’t want to wear shoes.

Wondering what is the reason behind it? It’s quite simple. The character has bear feet. Now, you know why everyone makes fun of him.

What would Winnie the Pooh say while entering his home?

Now, this sounds quite interesting.

Isn’t that funny? Certainly, Winnie the pooh jokes are famous amongst children and adults alike.

What if Winnie cries?

Have you figured it out?

Many people tend to claim that if Winnie cries, he would make a sound: ‘poo-hoo.’

This one was out of the blue. We are just trying to digest this joke anyhow.

Why would Winnie the Pooh’s wife be jealous?

If Winnie the Pooh will have a wife, then she is going to be jealous, because he will bring a new bottle of honey every other day.

We all know how much Pooh loves his honey.

We hope the Winnie the Pooh jokes mentioned in this article will bring a smile on your face.