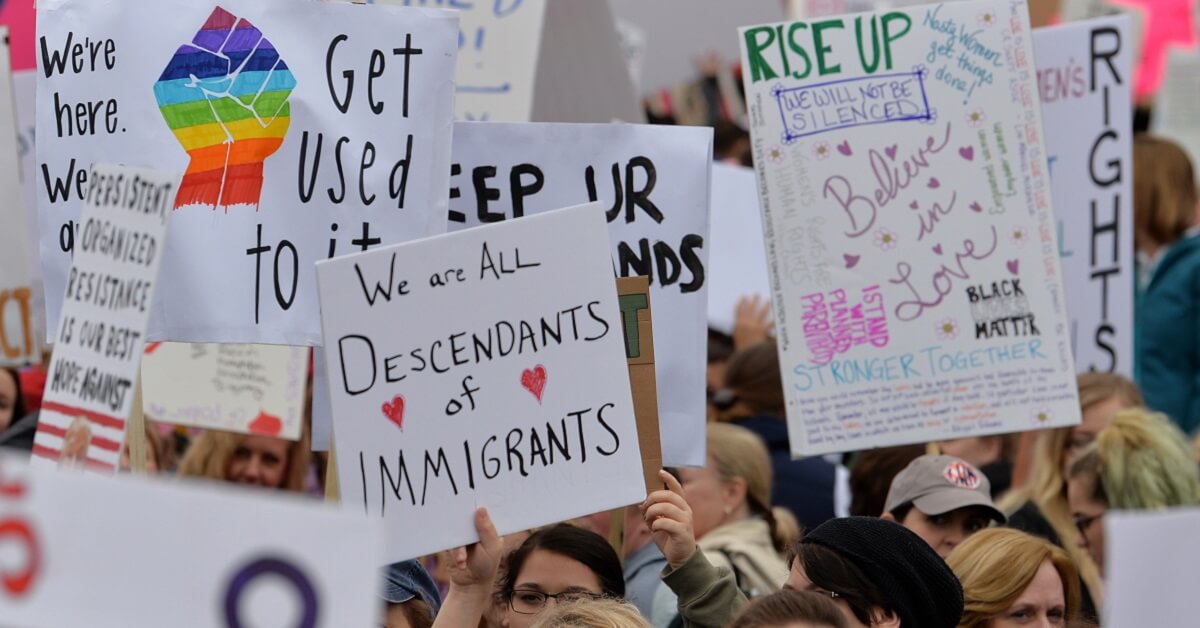 This is the 21st century, and you cannot just sit back and watch everybody walking over you. Unfortunately, nobody would hear you out here in this world until you grab a protest sign with your friends and jam the streets. Women of Washington D.C. were bold enough to do a similar thing like this. They came out to show their dissatisfaction with the policies of that time and protested against them. The women’s march seemingly started in Washington D.C. initially, but soon it turned into a record-breaking worldwide protest. One thing we must admit, they had the best signs for women’s march ever.

Women March in the U.S

The U.S. has reportedly had around 408 marches alone, while 168 in the rest of the countries. The marches that took place in the U.S. were massive and brought 500,000 people to Washington D.C alone. The total number of people drawn to the U.S. at that time was 2.9 million. The intensity of the protest was insane. At the same time, people were busy creating snarky yet funny posters that stores ran out of cardboard.

Did you ever make It to a protest? If not, then we bring you some best signs for women’s march that we came across on social media. Let’s check them out!

Women have always been targeted and restricted from doing stuff of their choice. If you go a few centuries back, things were pretty similar, but today, it has reached a whole new level. The U.S. might seem a liberal country from the outside where women can live the life of their choice. Still, the government makes policies to restrict them legally. So, this march is the perfect demonstration of inequality prevailing to date.

Ninety, Nasty and not giving up

First, we must appreciate this old lady who came out and stood with the young generation to help them fight for their rights, but at the same time, it is heartbreaking. Still, she has to fight the very same fight to this date. We need more people like you, love you, granny!

So bad, even introverts are here

This one is probably the best women’s march sign ever. It also went viral so many times, even after the march. The size of the crowd in the Washington D.C. women march seemed like women from all over the U.S. came out in the streets to fight for themselves. And you know what? If the introverts are out, that means, there’s some real crisis going on.

Ok, this one is hilarious. We all know how good IKEA cabinets are…

If those over-advertised cabinets are being called good, imagine how cheap it must be the real cabinet was in those times.

The couple was hanging the protest sign saying, “this is what a feminist looks like,” It was the cutest thing in the march back then. The couple is giving us some serious relationship goals. Everyman should support his partner as this old man does.

I stitched this so I could stab something 3000 times

This one is an embroidered poster a protestor at the march made, it seems like he was pretty angry that he wanted something to stab into. Glad it was not us.

Sometimes, we wonder if this is a reason why women created tapestries over the centuries.

Some of you might not understand the context of this protest sign, and it may look silly to you, but if you go deeper, you will know what it is saying.

The tower in which the president sits and makes weird policies was created with the help of women. If women are supporting their president, why couldn’t they do the same?

My arms are tired from holding this sign since the 1960s

The sign is undoubtedly incredible but portraying such a terrible indictment of society. This sign proves that women have not been treated equally since the 1960s or even before this.

Until we have people like her, we won’t be giving up on our rights. When there is a will, there is a way.

This sign is making us feel blessed to share sisterhood with the granddaughters of the witches. Long live to witches’ granddaughters!

Also, Lily Reinhart’s sister spotted this sign during the march, and she doesn’t know that her big sister is super proud of her for taking part in the march.

Diversity is beautiful and yet powerful. Companies that celebrate diversity are touching the sky. For instance; coca-cola, Johnson and Johnson, Mastercard, etc. These companies are setting an example that if you cherish the differences, you will be more successful.

Apart from this, don’t you think America is a country made by diverse people?

Boys will be good humans

Indeed, this kid seems to be raised by some really amazing parents. The teaching that we inherit from our parents and grandparents reflect on our personality. When you treat others wrongly, it just not portrays you as a negative person but also your family. So be wise and be kind to everyone.

Thanks, Trump, you turned me into an activist

When people unite against wrong, it brings them together and makes them closer. This sign is a clear example of how the Washington DC march turned many random people into activists. Now they are standing united and firm to fight for equality.

It’s astonishing how people are more united than ever now!

There were other signs as well that were equally incredible, like those we have shared above. All these signs have converged on one single message, which is equal rights for all. This march delivers a bold statement to the government of all times that “women’s equality is human equality.”

The Washington march is for sure one of the biggest marches in the history of the U.S. It gave the world a note that women will stand for themselves whenever required; they simply won’t sit back and watch the show.